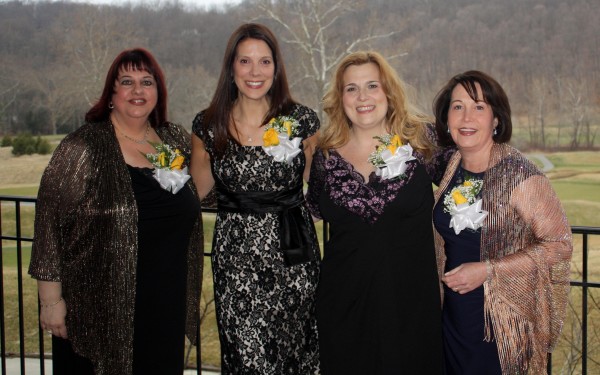 The Spirit Awards are given each year to honor those who demonstrate dedication to the organization’s mission by providing inspiration, time, talent and other resources. This year’s Spirit Award recipients are:

This award is presented in honor and memory of Maria who helped create Support Connection’s Peer Counseling program and other services. It is given to someone who follows the example established by Maria: making a positive difference in many lives through the power of caring.

Sue Andersen, a breast cancer survivor, has been involved with Support Connection since her diagnosis in 2007. She reached out and quickly connected with one of the organization’s Peer Counselors who helped her every step of the way. She also benefited from participating in a support group for young women with breast cancer. As soon as she was able to, Sue began volunteering. She started by attending health fairs to distribute information and now is a volunteer facilitator for 2 different monthly support groups. Sue gladly gives her time because of the difference Support Connection made in her life. She says “Your world is literally turned upside down when you’re diagnosed with breast cancer. If it was your mother, daughter, sister or friend, wouldn’t you want a place where she could go to be comforted and supported during this journey? Support Connection provides a place to go and talk to people who know what you’re going through. If I can make a difference in one woman’s life, it makes all the volunteering worth it.”

This award is presented to honor someone whose efforts and actions enable Support Connection to reach out into the community and connect with people in need of support.

These awards are presented to individuals who offer inspiration to other cancer survivors. They have taken their own experiences and translated them into an opportunity to raise awareness about Support Connection’s mission

Paula Natale reached out to Support Connection after being diagnosed with breast cancer in 1999. From her first call, Paula felt a tremendous sense of relief and was better able to cope. She was so grateful for the support she received, she began telling everyone she knew about Support Connection. One of those people was Phyllis Karlin, who owned a jewelry business KBK Designs; Phyllis and KBK became regular donors to Support Connection. Paula is also a regular participant in the organization’s annual Support-A-Walk in October, raising funds along with a team of friends, family and co-workers. She says: “The people at Support Connection are very warm and caring. I know anyone reaching out to them will get the help they need from start to finish. The wonderful women at Support Connection have helped me through all these years, and I would like to give back for that.”

Lisa Olmos was one of the very first women to reach out to Support Connection for help. She called shortly after she was diagnosed with breast cancer in 1996, the year the organization was founded. Talking to someone about her concerns meant a great deal to Lisa. She also joined Support Connection’s first breast cancer support group and participated while she completed 3 years of chemotherapy. She developed close, lasting relationships with the other women in the group. Soon after that, Lisa began volunteering, responding to phone calls from other women. Because she is fluent in Spanish, she continues to be a valuable resource to the organization. Lisa is also an oncology nurse; throughout her career, she has often shared her story and Support Connection’s services with other women she meets. Lisa says: “Finding Support Connection was incredible. Just having someone to talk to made all the difference. I’ve seen them grow over  the years but they are still so special. It’s important to support them so they can continue helping women who face the devastation and trauma of a cancer diagnosis.”

Patricia Witters met fellow honoree Sue Andersen through a mutual friend after being diagnosed with breast cancer in 2012. In addition to offering personal support, Sue brought Patricia to a support group meeting. From that point forward, Patricia has been a regular support group participant and utilizes many of Support Connection’s other programs and services. To encourage others to support the organization, Patricia has allowed Support Connection to share her personal story to demonstrate that donating to the organization can change a life. She also participates in the annual Support-A-Walk. Patricia says: “When I was first diagnosed, I would drive myself crazy with fear. I had no idea Support Connection existed. I feel so very fortunate to have found this outlet and want to pay it forward. It makes me feel good when I can help others who are going through this horrible disease.”