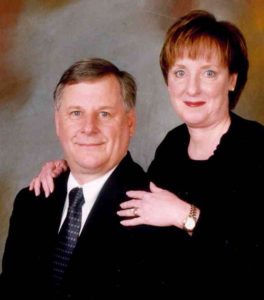 Dennis Neuberger and his wife Eileen began utilizing Support Connection’s support services while dealing with Eileen’s breast cancer diagnosis and treatment. Sadly, Eileen passed away in 2015. Since then, Dennis has continued to be involved with Support Connection, and he shares the following reflections about their experiences:

When my wife Eileen was diagnosed with breast cancer in 2010, our world changed so suddenly. We felt alone and, especially Eileen, scared about the future.  A friend who had cancer came to the house and told us about Support Connection. The Circle of Support began for Eileen and, to my surprise, for me as well.

My father had a saying he repeated to me over and over as I was growing up: “Unless you have experienced it, do not give advice.” Eileen made an appointment at Support Connection to see a Counselor. The Counselor who met with her was a cancer survivor! After that meeting, I could tell that Eileen was more prepared to battle the disease.

Over the next four years, Eileen attended cooking classes, information sessions and we both attended the annual Celebrate Life Day luncheon. Whenever Eileen had a question about treatment or tests or anything at all, Support Connection was always there.

The Circle of Support wasn’t only for Eileen. It also included me. I was contacted to see if I wanted to join a support group for men who had wives battling the disease. It is called “Wing Night” and it became a tremendous source of support for me.

The next path of the Circle came when Eileen was near death. It was 4 pm and I was with her in her hospital room. She was not conscious and seemed to be in a lot of pain. Suddenly, the medical staff came in and said she was being released in two hours. They said she could go home or to a hospice. Panic hit me. I didn’t know what to do.

I called Support Connection and within minutes a Counselor was on the phone, calming me down and giving me contacts to call at Medicare. I learned I had the right to refuse Eileen being released. Each Counselor contacted me on my cell and gave me their phone numbers, telling me to call if I needed any help, anytime. Eileen was gone 5 days later.

Two months later the Circle was completed. As the holidays approached, I found myself trying to interpret the many different signs, actions and communications from family and friends. I realized this was a new path for me, and also for them. In most cases, there was a tremendous outpouring of support as I would go from high to low. Nevertheless, confusion, sadness and a sense of depression started to set in for me.

I mentioned these issues I was dealing with to Katherine Quinn, Support Connection’s Executive Director. She invited me to the office where I met with her and a Counselor in the Hope Room. They asked me about my feelings, both positive and negative. What followed was a wealth of information and advice that helped me understand my own feelings as well as what my family and friends were going through concerning the loss of Eileen. That session, plus the men’s *Wing Nite, headed me in the right direction. Again, a weight was lifted off my shoulders.

I’ve talked with different family members about what Support Connection has to offer, including my niece Kathleen. She was only 20 years old when her mother, Eileen’s sister Anne, faced cancer.  She was away at college while her mom went through the operations and treatments. It was very stressful for her. When I talked with Kathleen about Support Connection’s “Circle of Support,” and how it includes family members, she said she wished there’d been something like that for her when she needed it.

I am now volunteering at Support Connection to help repay a small part of what Katherine and her team did for Eileen and are still doing for me to this day. The Circle of Support has no ending, it is always there for you.

« Putting Together the Pieces The Beauty and Luxury of Book Club »