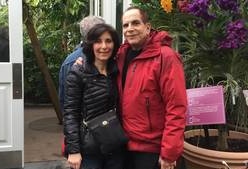 (Published by The Somers Record)

By Brian Donnelly for The Somers Record. Photo courtesy of Debra Wolf.

When leaving the house, Debra Wolf always makes sure she has her keys, wallet and a bag of brochures from Support Connection.

The retired nurse and 39-year Granite Springs resident often hands them out, hoping to connect women battling cancer with the organization’s free support services. They are the same services that “changed her life for the better.”

Wolf, now 68, was diagnosed with uterine and cervical cancer in April 2006, one day after her birthday.

“It was such a shock. I would’ve liked to have sat my kids down and told them the proper way,” she said, regretting the rushed phone call to her daughters. “Not to scare them like I did. But, I was scared, the way it was put to me.”

Her gynecologist called Wolf in tears, she recalled. The physician had been confident the biopsy Wolf insisted on getting the day prior as a “birthday present to herself” would show nothing wrong.

“I think we were just going out for the day and the phone rang and her doctor was actually in shock,” Wolf’s husband of 44 years, Peter, said.

Wolf had experienced vaginal bleeding, which was her first sign something was, in fact, wrong.

“And even though I have a medical background, it’s still very scary when you have something like this and you hear this diagnosis,” said the long-time nurse at The Harvey School in Katonah.

Her doctor told her she needed to take care of this immediately. The mother of two and grandmother of six had successful surgery, followed by radiation.

“I didn’t hear about [Support Connection] until the very end of going through radiation,” she said, adding that she retired from nursing after her diagnosis. “I happened to see a brochure, and that is how I heard about it.”

Support Connection, based in Yorktown, provides emotional, social and educational support services to women, their families and friends affected by breast and ovarian cancer.

“If I had known about them that would’ve really helped me; the counselors were helping me after the fact,” she said. “And that’s why I go and I pick up all the brochures and I bring them to the hospitals. I bring them all over and I do my best to inform people…They have really changed my life for the better.”

“When she’s interested in something she really goes all in, and I guess that’s what happened with Support Connection,” Peter said.

“Having come from the other side myself, what we’re able to do is truly empathize with them,” she said. “What comes with the diagnosis though is still a lot of fear and a lot of confusion…We kind of help them navigate through all of that. That’s the tough part.”

Karl was one of two peer counselors Wolf would meet with.

While battling breast cancer 13 years ago, Karl didn’t have as good an understanding of what to do as Wolf. She also called Support Connection, whose peer counselors helped her navigate her way to the treatment she needed.

“I didn’t even know what type of doctor to call,” said Karl, who went on to volunteer with Support Connection, and then get trained to be a peer counselor.

Early on in her career as a nurse, Wolf worked with cancer patients.

So, when Karl and the other peer counselors showed her that same attention and were able to connect with her experience so well, it made her feel good.

“When you walk in that door they treat you like you’re the only person there,” she said. “They give you so much love. They just are there for you and no one else.”

Support Connection also offers activities, like knitting and yoga classes, that give patients a chance to meet others going through the same thing.

“It wasn’t only the help they were giving her with medical issues; it was really the support she got in being able to interact with people,” Peter said. “Just feeling you were participating in something and sharing your life with people who have been through this before. That was the real plus for her.”

Another activity is the annual Support-A-Walk, the organization’s biggest fundraiser. Held at FDR Park in Yorktown, the walk brings thousands of people out to support its services. More than 9,000 walked in 2015.

“Literally the whole FDR is filled with balloons and a lot of vendors just donate their goods…and the cheerleaders from the school are cheering, and they’re singing as you do the walk,” Wolf said.

Wolf has walked with a group of women she met during the weekly yoga classes. They called themselves the Royal Yogies. Now, she walks with her husband. She has raised about $7,000 over the years and hopes to raise more each year to support the people who got her through the toughest period of her life.

To learn more about the Annual Support-A-Walk, contact Support Connection: 914-962-6402 or walk@supportconnection.org.