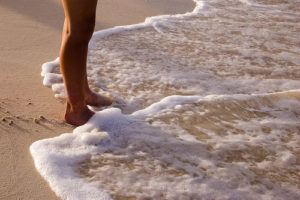 Andrea is one of the Peer Counselors on our staff. At one point, she facilitated 4 support groups a month. In this blog post, she shares her personal experience as a support group member after her own diagnosis in 2003, as well as what she’s learned from other women she’s worked with since joining our staff in 2005.

Are you hesitant about attending a support group? Believe me, I was. As far as I was concerned I really didn’t have cancer. Going to a group would make it real and I was not ready for that.

Newly diagnosed, awaiting surgery and confused, I decided to put my toes in the water. Wrapped in my cancer diagnosis security blanket (my son’s high school soccer team sweatshirt – worn every day from diagnosis thru treatment,) overalls on, “MY HAIR” pulled back in a ponytail, I sat as far away from the other women in the room as I possibly could. I really didn’t have cancer (or so my only working sense, “denial,” kept telling me)…. the other women did.

A deer in the headlights not blinking or breathing. What was being said was a blur around me. I remember saying where I was in the journey and how confused I was. And then the meeting was over and the women who had cancer left.

The support group facilitators stayed and I cried. I actually had cancer too. The facilitators encouraged me to get a second opinion, to find doctors who understood my fears and would answer my questions. They handed me Dr. Susan Love’s Breast Book. The book became my Bible and the words of the facilitators my mantra: “Find a medical team that works for you.”

Why would I ever go back? My cancer is going to go away. I just need to read this book and find the right team of doctors. Cancer will go away and life will go back to the way it was. So I focused on my tests and treatments. I became immersed in finding doctors, asking my questions, learning about the different types of breast cancer, going for multiple scans, tests and surgeries and treatment.

My treatment was over and there was no evidence of disease, but cancer did not go away.

I put my toes in the water again and this time waded in up to my knees. The other women in the room were also struggling to understand why cancer did not go away.  I realized, other than the topic, a cancer support group is no different than a working moms group, a new moms group, an adoptive parents group, an AA or gamblers anonymous meeting. We are all people in a situation we feel alone in.

We learned from each other. We cried a lot and laughed a lot. We discussed poignant issues, emotions, physical changes, work, family, and relationship challenges. We shared resources and information, family cancer histories, fears, and our thoughts on what cancer had robbed from us of and what we learned from it. We discussed how we saw ourselves and how others did. We discussed words like battle, survivor, vulnerability, courage, grace and life. We were all different but we had all been in the same place. We were no longer alone. We had people to support us and people who needed our support, and both made us feel good. The water was welcoming and I dove in.

We supported each other, regardless of the individual baggage we brought with us and the stage of disease. The daunting fear of being in a room with others whose situation may be more or less challenging was lost in the dialogue, empathy and companionship.

We connected with each other. We had all heard the words you have cancer.

In group one night, one woman asked another woman who had advanced stage cancer “How does it make you feel being the only one in continual treatment?” The answer was “We all know the proverbial bus can come by and hit us any time. Thanks to cancer we all see that bus coming. This group is the stop sign we all need.”

It was the unwavering belief in the power of support that prompted these words about group, from that very same woman: “They talk with me, encourage me, ….They laugh with me and cry with me…They help me find the sun.”

Support groups are not for life and they are not for everyone. But, if your cancer is not going away like you want it to, they are a good place to start. Put your toes in the water and wade in…. you may just find a little sun.

Learn about all of our ongoing support groups.