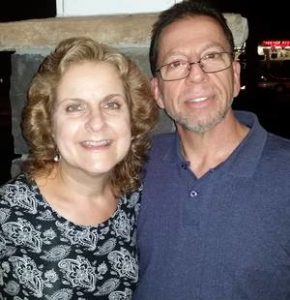 (Published by The Mahopac News)

When David Tartaglia found out in February 2010 that his wife, Julie, had breast cancer, he, of course, was devastated. But then his next thought was, what can I do to help?

“I went to every doctor’s visit,” he said, “I was one of those who could because my job allowed me that flexibility. I was there for the biopsy and was there on the phone with the doctor discussing what kind of surgery she would go through.”

Tartaglia, a Mahopac resident for the past 15 years, said he comes from a caregiving background and his first instinct was to be supportive.

“Everyone reacts differently,” he noted. “For me, it was an opportunity to learn as much about it as she did.”

Julie got involved with Support Connection, the Yorktown-based support organization that works with women who have been diagnosed with breast and ovarian cancer and their families. Through them,Tartaglia learned about an event called, “Wing Night,” an evening when the husbands of women with cancer got together over a meal and discussed their challenges.

“Julie said I should go to Wing Night, so I called them and I went,” he said. “It wasn’t facilitated by the [Support Connection] staff. They don’t promote it as a ‘support group’—it’s more a get-together. But it was kind of like a support group.”

Tartaglia said the event afforded guys the opportunity to talk about their experiences if they wanted to.

“Traditionally, it’s not the type of environment that a lot of guys would go to,” he said. “They asked me what I thought of it and I had some ideas how to get more guys involved.”

His ideas included creating a newsletter for the husbands and partners and setting up a booth at Support Connection’s annual Support-a-Walk fundraiser to spread the word about Wing Night and other programs for spouses and partners.

“Before I went [to Wing Night], I was told what to expect, which is a great reflection on how Support Connection knows their people,” Tartaglia said. “It didn’t sink in until I got there: Do I really want to talk about this? But I noticed that all these guys were really supportive of their partners and what moved me to come up with ideas was it sounded like their relationships had been deepened as a result of having gone through the experience of being a caregiver. When we were talking in the group, we were all preaching to the choir. We needed to get more guys in there. It can help you strengthen your relationship in ways you would never think about.

“[My wife] was given the all-clear, but the challenges that anyone who has cancer has—no matter how much treatment you get—is there is always that fear in the back of your head you will get it again,” he continued. “We (as husbands/partners) have to constantly be asking how they are feeling because just because they are cancer-free, we don’t know if they are living in fear, or suffering from side effects of medication. That’s how talking to other guys can give you some perspective. Our job as partners and husband is to provide whatever support our wives need and put our own feelings aside.”

This year, the Tartaglias will once again participate in the Support-a-Walk. They’ve only missed one since Julie’s diagnosis. The Walk is slated for Sunday, Oct. 2, 9 a.m., at FDR State Park in Yorktown Heights. It’s the organization’s most important fundraiser. Proceeds provide funding for Support Connection’s year-round support services, which have helped thousands of people since the organization was founded 20 years ago. The Support-a-Walk was created by local residents to bring attention to the needs of people affected by breast and ovarian cancer. People travel from across the Hudson Valley and beyond to take part. Last year, there were more than 9,000 participants.

People of all ages complete a 3-mile walk—often in honor of loved ones—a celebration of life and a tribute to those who are affected by breast and ovarian cancer. There is a Survivor’s Welcome Area where volunteers greet and welcome cancer survivors. Along the Walk path, walkers are encouraged and cheered by local bands, cheerleaders and other community groups. Families, friends, co-workers and teams of walkers are invited to walk together. Individuals are also welcome to participate.

Julie Tartaglia never underwent chemotherapy or radiation treatments, but did have two surgeries. She’s been cancer-free for more than six years.

“We will be celebrating our 25th wedding anniversary the week after the walk,” Tartaglia said. “Julie and I have gone and brought our son almost every year. To see that many people there and so many men there—well, it’s empowering that they go to the Walk and support their wives.”

Tartaglia said Support Connection played a vital role in his wife’s recovery (she still uses its services) and he recommends that anyone going through similar trials reach out to them.

“Talk to someone at Support Connection; they are the most objective at handling this,” he said. “They have the most professional people there. They are efficient and on the ball. They have a prime directive and they don’t lose sight of that.”

And, of course, he said husbands should not balk at getting involved in events such as Wing Night.

“You can step outside of your thoughts,” he said. “There are a lot of questions and most of us guys aren’t thinking about them.”