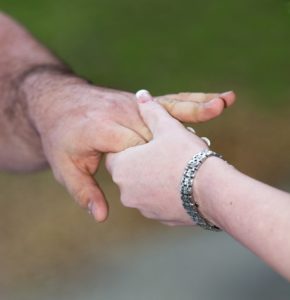 A diagnosis of breast or ovarian cancer changes the life of the person who’s been diagnosed. But it also affects people who are close to them, such as a spouse, life partner, or any caregiver or loved one. The impact can be profound.

At Support Connection, we are here for everyone: The person who’s been diagnosed, as well as any caregivers or loved ones who are part of the equation.

To offer some insight, three couples who reached out to Support Connection share their personal experiences: 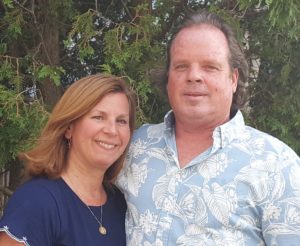 Dottie was diagnosed with breast cancer in January 2005. At the time, she and Jim had two children ages 6 and 4. Her treatments included surgery as well as months of chemo and radiation. Dottie and Jim have been together for more than 25 years, married since 1993.

Barbara was diagnosed with breast cancer in December 2014. She has undergone multiple surgeries and chemo treatments since then. Barbara and Steve have been together for 7 years. 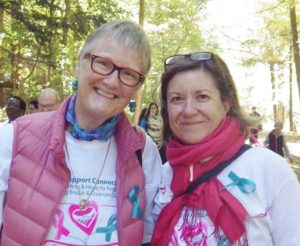 Jane was diagnosed with ovarian cancer in early 2012 after months of painful and confusing symptoms. She underwent a series of surgeries and treatments, finishing chemo in July that year. Jane and Valerie have known each other for more than20 years and were married in 2015.

When your spouse or partner was diagnosed, what was the hardest thing for you?

Jim: I got scared at first. I had so many people in my family who died of cancer. I also felt so bad for Dottie, that she had to go through this. She didn’t deserve it. Everything was going along so well. At first we thought she had a cyst, then it turned out to be cancer. It was shocking.

Steve: I worried about how Barbara would handle it. The decision-making was hard. I worried about her physically and about how she’d get through it all. I was also concerned about the outcome, wondering what was next. My only other experience with someone having chemo was many years ago. The woman I knew who had chemo really went through hell. It worried me.

Valerie: We lost Jane’s best friend to cancer in 2008. She fought for 10 years. When she was near the end, she stayed with us and I spent a lot of time taking care of her. When Jane was diagnosed, that was in my mind. It was like a black curtain coming down over me. I was afraid for the future. I felt utter fear about the future. But then, you just gear into action; there was no time to waste.

What helped you cope with your partner’s diagnosis, treatment and recovery?

Jim: I went to all her doctor’s appointments, read everything at their offices. I learned all I could. That made me feel better and more confident she’d be okay. I also talked about it, to my family, my brothers. In my work I meet a lot of people; I talked to them too. When I shared what we were going through, I was surprised how many other people had also gone through it. That helped a lot.

Steve: I was as involved as possible, learned everything I could. I talked to the doctors and nurses. It helped me not think the worst. I joined Support Connection’s men’s group. Being with the other men, I see they’ve gone through some of the things we’re going through. I can vent rather than keep it all in. It helps to have other people just listen.

Valerie: I relied on my support network. Our amazing friends, my family although they’re far away. And Support Connection. One of their Peer Counselors is our neighbor. I’m so glad we reached out to her. She showed and gave us such strength. She connected Jane with another survivor to talk to. It helped me to know Jane was getting the support she needed. Because we’re expats, with our families so far away, Support Connection became our substitute family.

What advice would you give other caregivers?

Jim: Have a positive attitude that it’s going to be okay. Take a lot of deep breaths. Talk to other people about it. Also make sure your spouse talks to other women who are going through it.

Steve: Never project the possibilities, it only leads to fear. Get the facts. Take it one step at a time. You can worry about the worst but it may not happen. Go to appointments, let the doctors know you’re involved. Ask questions; she may not think of the questions you have. Know you’re not alone. Cancer is so common, so many people understand what you’re going through. Reach out, ask about support groups. Share with friends, clergy, a counselor. Talk it out. It won’t always give you answers, but by talking about it you’ll find the answers yourself.

Valerie: Don’t think you have to be the strongest person on the planet. Express your feeling to each other and to someone else who understands. Don’t keep things bottled up; it will backfire.

When you were diagnosed, what concerns or worries did you have about your spouse or partner?

Dottie: Somehow all along I knew I’d be okay, I never thought I’d die. But my heart was breaking inside for Jim. I knew he was scared because of his past experiences with cancer. I kept trying to reassure him. I knew he was trying to be “strong.”

Barbara: I didn’t really worry about Steve, he seemed like he could take it. But I was concerned about all the changes my illness meant for him, the impact it had on his life. He has grandchildren who aren’t nearby, and he didn’t visit them while I was sick because he wanted to be there for me.

Jane: I couldn’t think about Valerie during my treatment; I was totally consumed, so exhausted. It took so much energy just to breathe. I had to focus on getting better. It was overwhelming. Later, I was more aware of what was going on with her. She maintained such a high level of attention to everything. When I finally started feeling better, she was exhausted and couldn’t take on anything more. I realized then how hard it had been on her.

What are some things your spouse or partner did that were helpful?

Dottie: Jim was always there. He kept reassuring me we’d get through this, together, that I wasn’t alone. He stepped in to do more with the children. He was a big cheerleader outside of our home, talking to other people about what I was going through, bringing back their encouraging words and positive feedback. He was very sweet, emotionally supportive. Sometimes just having his silent support was what helped the most.

Barbara: Having Steve with me was so important. He went to all my appointments and tests. He talked to my doctors with me, helped me make decisions. He went to all my chemo appointments, 3-4 hours each; he stayed the whole time to keep me company. He took care of me at home, did all the housework and cooking because he knew I wasn’t up to it. He talked to a nutritionist for suggestions on what to cook when I was so sick from side effects. He went through everything with me.

Jane: Valerie was like a rock for me. She was there every moment. In the middle of the night. 24 hours a day. She never said no to anything, any special requests. She made meals for me, took care of my meds, tried to make me laugh. She involved herself in every feeling I had.

What changed for you as a couple?

Dottie and Jim: We’d been thinking about having a third child and then this happened. It’s one thing to make that decision yourself, it’s another thing to have the choice taken away. We also went through a rough patch when the treatment put Dottie into menopause overnight. It had a huge physical and mental impact. It was hard on us. We had to find ways to communicate, to step back and remind ourselves what was important. In the end, it made us stronger, brought more unity to our marriage, knowing we survived all this.

Barbara and Steve: It really changed things. We decided to keep things as simple as possible. We looked at life different, one day at a time. We didn’t project what our future would be. We became stronger; we never gave up even when things were bad. We became closer and learned to deal with cancer and making decisions together since it affected both of us .

Jane and Valerie: It made us much stronger. Because of what we went through, we’re much more confident about facing anything that might come our way. Jane: I have a deeper sense of Valerie’s strength, tenacity, love, resourcefulness. I feel even more committed to us and to her. Valerie: I saw things in Jane I’d never seen before. She never complained. I gained such admiration for how she handled it all. It made me so proud of her.

What advice would you give other couples?

Dottie and Jim: Allow your partner to see your vulnerability and uncertainty so they can help you. It gives them purpose; they really do feel a sense of helplessness. If you feel like crying your eyes out, screaming at the top of your lungs, or just want to sink into your partners’ chest and let them bear the weight of fear and uncertainty, do it. It’s necessary for both of you. Remain open, communicate, be kind to one another. Make sure your partner knows you still love them the same. Make time as a couple. Go on a date. Take a weekend escape. Go to a movie, just spend time together.

Barbara and Steve: Never give up. Don’t let it get to you. Keep fighting. Get advice from as many professionals as you can. There’s always new and changing information. You need to stay informed.

How was Support Connection helpful?

Dottie and Jim: The staff is amazing. They help you through things you wouldn’t even think about. And whenever Dottie came home from her support group, she was like a different person. Also the Support-A-Walk is great every year. Seeing so many people, other couples, reading the names people are walking for. We’ve met so many people we know who we didn’t realize were affected by this too. We see we’re not the only ones going through it. It’s always uplifting, so reassuring to be there.

Barbara and Steve: Barbara talked with two counselors regularly and we talked to a counselor together. Barbara also joined a support group. She’s made new friends, women she can talk to without burdening Steve. Without Support Connection everything would have been even harder. The decision-making process would have been more difficult for us. We got so many answers through Support Connection.

Jane and Valerie: Talking to the Peer Counselors was so uplifting and gave us such hope. When Jane started losing her hair, she spoke to a Peer Counselor who really understood, because she’d gone through that too. She listened to everything, it was so helpful. Attending the Support-A-Walk and other events, you feel so connected and see you’re not alone. No one else can give you that, only people who’ve been through it. It’s very powerful.

We are here for you!

If you have a loved one diagnosed with breast or ovarian cancer, don’t hesitate to reach out to us with questions, concerns, or just to talk to about it.

« Parceling Energy With Cancer Looking Past the Pink »