In her story, Mary shares her experiences with neuropathy. Peripheral neuropathy is a side effect linked to certain chemotherapy drugs. It’s important to note that not everyone who receives chemotherapy will experience side effects like neuropathy. And of course, we all want our cancer to go into remission and will do everything we need to facilitate that. But many women do struggle with side effects, and we want them to know they are not alone. 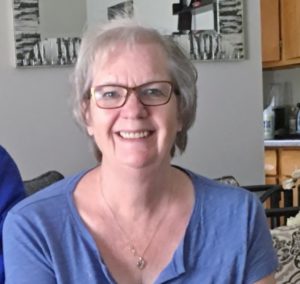 Ten years ago, I was faced with the news that I had cervical cancer. I was told that I would have a radical hysterectomy and there would be no need for chemo or radiation. I was fine to undergo the operation and grateful I would not have to endure treatment following it. Unfortunately, during the hysterectomy, it was discovered that I also had ovarian cancer. To much surprise, both cancers were primary and it was decided it was necessary to treat the ovarian cancer with two different chemo drugs.

On a very hot day in June, I receive my first treatment with chemo. I sat in an infusion room with no AC, yet my feet turned ice cold. In the few days that followed, I developed severe pain and numbness in both feet. After a phone call to my doctor, I was told it was neuropathy. It was recommended that I take specific vitamins in large doses. The pain was so severe that I immediately began taking what was suggested. As I have found out countless times in the past ten years, many medical professionals have little knowledge and experience with neuropathy. I had actually made the neuropathy worse by taking those vitamins.

I finished my round of chemo treatments the following November. While I was relieved to have completed my treatment, I suffered daily. Although my feet were numb, it caused a pain so severe that it kept me up at night. Shortly after my treatment was finished, I was prescribed an anti-seizure drug which helps neuropathy. Although it alleviated some pain, there were side effects. For the past 10 years I have had memory loss and poor concentration due to this drug. I have seen many doctors, been prescribed other medications, and have done a massive amount of research. Either medications prescribed didn’t work, or the side effects were even greater than what I was taking.

In April 2010, three years after my first diagnosis, it was found that I had a mass in my spleen. I had a splenectomy and the mass was metastatic cancer from my cervix. On to more chemo.  Of course, the news of cancer was upsetting, but the idea that I would endure even more pain from neuropathy worried me greatly. By this time, I was going to a different oncologist, and I told him that although my priority of course was to get rid of the cancer, it was also important to me to have chemo drugs that did not make the neuropathy worse. He listened and was supportive. Luckily, my symptoms of the neuropathy didn’t worsen from these treatments.

I’m very happy to say that I have been cancer free for 7 years. They haven’t been easy years though. The neuropathy has gotten worse although the neurologists say that can’t happen after chemo is finished. I had to go on long term disability as I could no longer work as a nurse due to the neuropathy as well as with the side effects of the medication.

My tolerance for pain is high. I recently had bilateral knee replacements, and since the day after surgery, I have taken nothing stronger than Tylenol. Yet the pain from the neuropathy at times can be unbearable and nothing seems to help. It’s hard to explain how an area can be completely numb, but be so painful at the same time. My balance is affected because of the numbness and my leg muscles are weak because of the poor nerve supply to them.

I think there is a little more awareness about chemo induced neuropathy since I developed it, but not nearly enough. I was told before my first treatment that I may get pins and needles in my hands and feet. That was a complete understatement.

I didn’t reach out to Support Connection until recently. Being so far out of treatment, I didn’t expect so much help, but everyone has been amazing and I wish I’d reached out sooner.