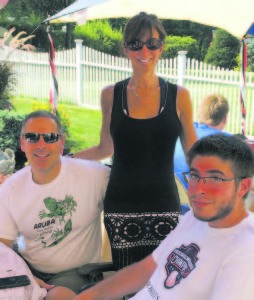 Beth Gilinsky with her husband Doug and their son John

(Published by The Yorktown News)

Beth Gilinsky felt like she was just waiting for bad news. The 15-year Yorktown resident had been getting annual mammograms, as the daughter of a breast cancer survivor. Doctors detected something irregular in 2006, leading Gilinsky to get a biopsy that revealed lobular carcinoma in situ (LCIS), a cell growth that causes higher risk for breast cancer.

After about eight years of getting checked every few months with a test or physical exam, the bad news she had feared became a reality in 2014: cancer.

“I was in shock as somebody might be, but I knew it could be me because of all the issues,” she said, referencing her family history and calcifications that had shown up before and in between her diagnoses.

However, that shock factor, Gilinsky said, was tempered thanks to a conversation with a peer counselor from Support Connection right after her LCIS diagnosis.

“When I called [a peer counselor from Support Connection] I had so much knowledge already and was so ahead of the game because of the fact that I had spoken to her years before,” she said. “I already had a breast surgeon because of all my issues.”

Yorktown Heights-based Support Connection is a 501(c)(3) organization, founded in 1996, that helps people whose lives have been affected by breast and ovarian cancer. Free of charge, the staff of peer counselors, all of whom are cancer survivors, provide emotional, social and educational support to women, their family and friends affected by breast and ovarian cancer.

“Certain things [my peer counselor, Andrea] said to me I might not have realized to ask my doctor, or to question or do,” Gilinsky said. “And even if you call to vent, I just need someone to listen, they’ll listen. And they’ll understand it and they get it because they’ve been there.”

The same peer counselor helped Gilinsky through the process of telling her family that she had cancer, something the mother of one said she struggled with.

“She was explaining to me how to say it, or think about how to say it. You don’t have to shock someone,” said Gilinsky, who waited a few weeks to tell her mother and father, and even longer to tell her son. “And those were the three people I was afraid to shock because they had enough to deal with at that time.”

Just a few months before her diagnosis, her father, Irv, was diagnosed with stage 4 lung cancer, which had spread to his brain. He succumbed to the cancer later that year in November, leaving his wife devastated.

“At that point life was in a tailspin,” said Gilinsky’s brother, Eric Schore, of Mohegan Lake.

The brother and sister had been pitching in to support their parents through a tough time.

“Again, my mom was an emotional wreck, understandably so,” Schore said. “Her husband was dying and my dad was dealing with his cancer.”

Realizing she was needed, Gilinsky just knew she had to get better, and fast.

The Yonkers native said she knew her diagnosis—a ductal carcinoma in situ—wasn’t a death sentence, because it hadn’t spread outside of the breast milk duct. She took an aggressive treatment course, opting for a mastectomy, which she had performed successfully Sept. 25, 2014, and reconstruction, which she had in February.

In addition to being able to focus on her mother and father, Gilinsky had another reason for choosing this path. “Every year I was so nervous and just waiting. I really felt like I was waiting to hear the word, ‘cancer,’” she said. “And when I did I was like, ‘I can’t do this anymore.’ And so I chose to do the mastectomy and reconstruction.”

With successful surgery, no radiation was needed, freeing Gilinsky to return to work as a real estate paralegal, and to her family.

“I’ve got to hand it to my sister,” Schore said. “Probably stronger than I ever saw her in my entire life. She did what she had to do…and she came out of it like a trooper. And she really was there for herself, and was there for the rest of the family. It wasn’t just her battling this, my dad was dying.”

On Oct. 4 Gilinsky will walk in Support Connection’s 21st Annual Support-A-Walk for Breast And Ovarian Cancer, which happens to be just a little more than one year after her mastectomy.

“It might be a little emotional,” she said, adding that she couldn’t walk last year because she was recuperating from surgery. “They have so many things available to people…Some people aren’t as fortunate as I am and they’re living with it and it’s a new lifestyle.”

“I’m hoping that all my friends come and walk with me,” said Gilinsky, who named her team Beth’s Bosom Buddies.

Schore and his wife, who he said is very close with his sister, will be walking with her team.

“Truth of the matter is we probably have never been closer because of everything that went on in the family,” he said.

Reflecting on the year since her diagnosis, Gilinsky, who took a moment to collect herself and wipe her eyes dry, had a message for all women and men.

“Cherish each day. Live life. Do things you might not want to do, or do things you’ve been putting off, because you never know,” Gilinsky said.