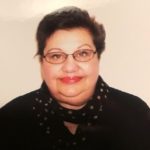 In 2004 I was diagnosed with uterine and ovarian cancer, both primary cancers. I was 60 yrs. old at the time. Having lost my sister in 1977 to ovarian cancer at age 36, I was very fearful.

It seemed as though I was frozen in time. I cried easily and often. A kindly nurse took my face in her hands and said “Anne, don’t stop living because you have cancer.” That helped somewhat. My oncologist told me that mine was a very big case and would look good on her resume. She meant it. I thought it was funny.

Right before the surgery, all I could think about was what stage these cancers were. My sister was stage 4 after surgery and died 3 months later. Thankfully my cancers were both 1a-2a.

I had six months of chemotherapy. It wasn’t as bad as I thought it would be…. losing all my hair seemed to be the least of my worries. I wore makeup and earrings and dressed up. I was there six hours so I brought books to read.

As soon as I had recovered from surgery and began chemo, my warrior self came forward and I became positive about getting through this with resolve and perseverance. I went back to work as soon as possible at my bakery.

Nine months later, at a routine mammogram, I was diagnosed with breast cancer, ductal carcinoma in situ. That was a shock, but I was very grateful for the early stage as I was about the uterine and ovarian cancers. I had 2 surgeries and a summer of radiation.

Today I am 13 years cancer free and thriving. Cancer has taught me gratitude. I laugh more now. I read a quote which I tweaked a bit: “My fear of being broken is greater than my fear of cancer.”